People for property since 1919.

In 1919 George V was Monarch, David Lloyd George was Prime Minister, Bank base lending rates 4%, inflation 10%, and William Edward Boot founded W. E. Boot & Son.  William had some part time experience working from his home in Property Management since about 1916 but the property market became his full time occupation in 1919.  Business was usually conducted from the front room of his home in Wolverhampton Road. 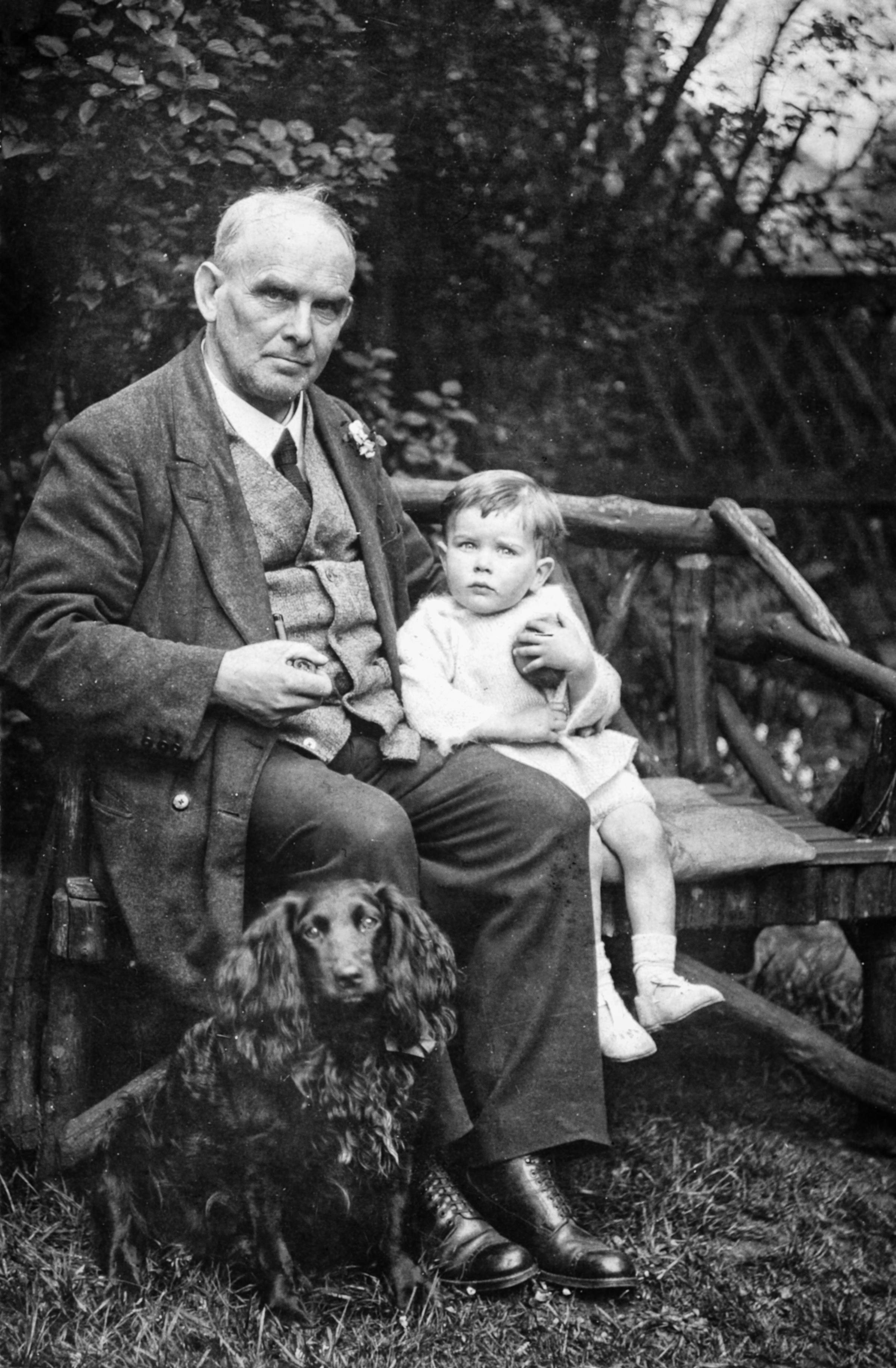 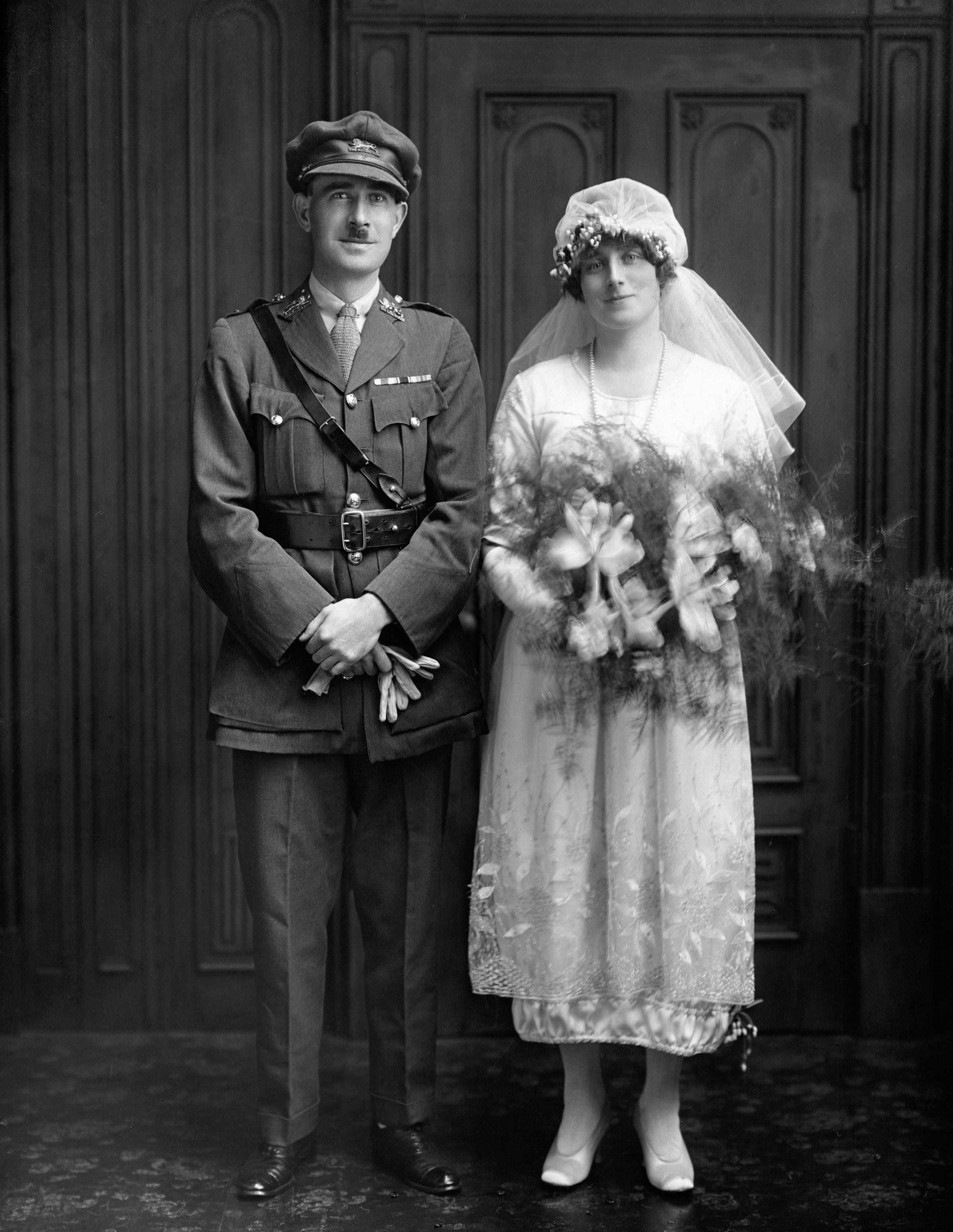 His Son, William Evelyn joined the Firm soon after active service in the Great War where he was badly wounded and awarded the Military Cross for the role he played in repelling the enemy and taking a German commandant prisoner.  His gallantry was recognised by Cannock Urban Council with the presentation of a gold watch. 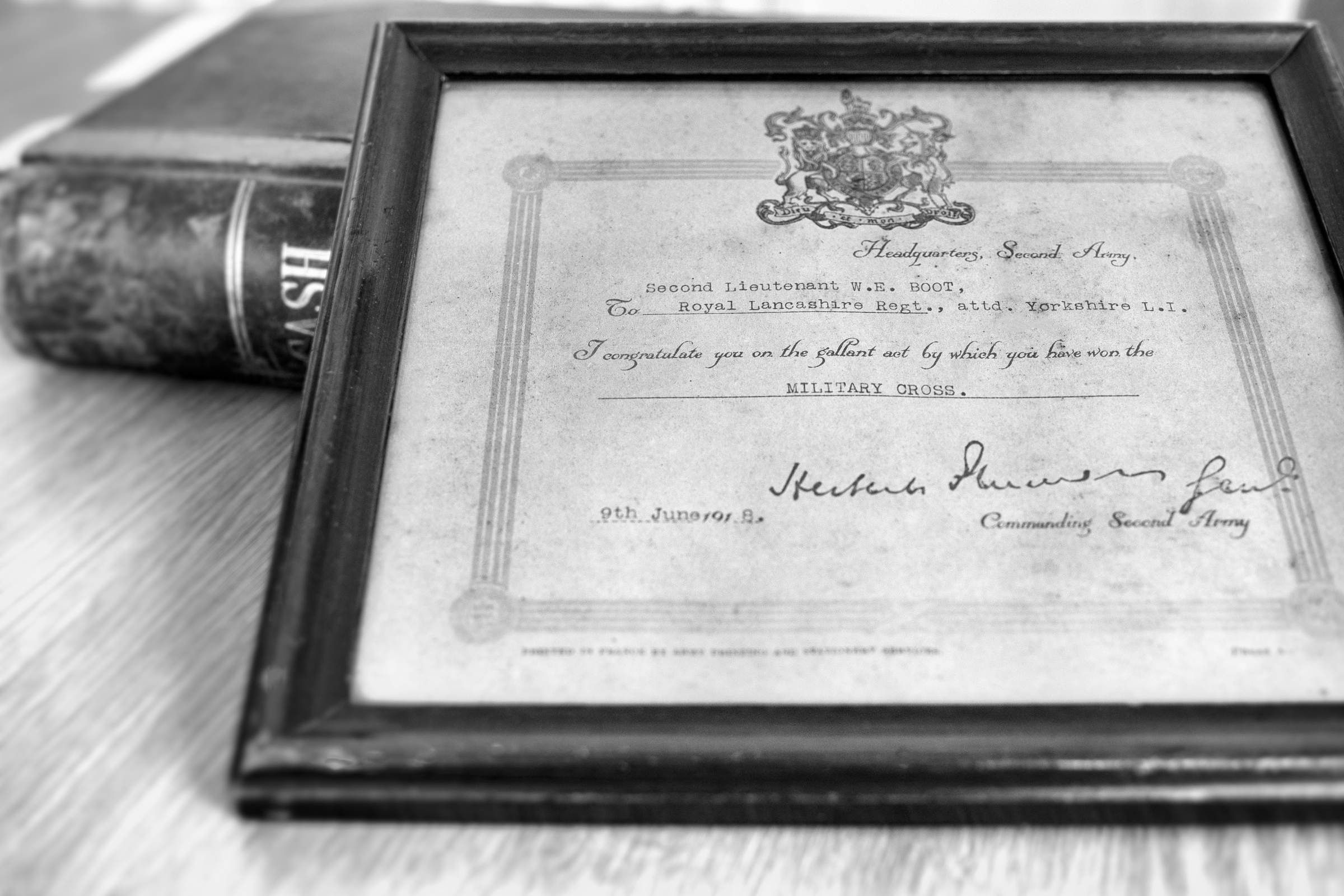 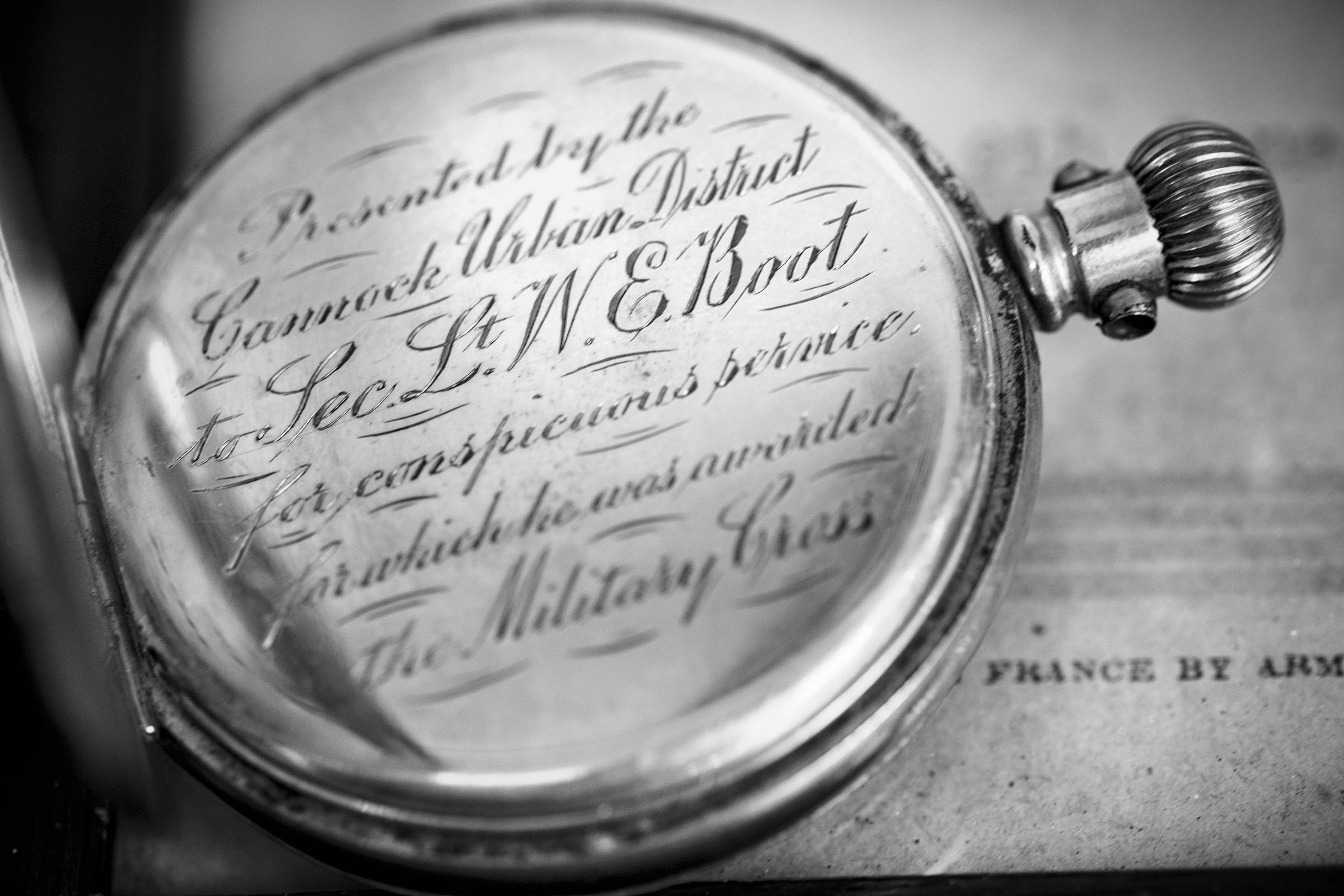 The Firm flourished and its main business was property valuations, Auction sales and surveying services.  They soon moved to rented premises in Queens Square and soon after purchased offices in Church Street, Cannock.

One of the most important early Auction sales took place on Wednesday 22nd September 1920 in the New Hall in Cannock.  It was the dispersal sale of the late Dr. J. K. Butters Collection of Skins and Memorabilia.  Dr. Butter was a resident GP in Cannock and lived in a large house on the site which is now Cannock Police Station.  A renown Zoologist and recognised expert on big cats, Dr. Butter maintained a menagerie of animals in his garden.  This included giant snakes, elephants, emus, ostrich, ocelot  and even a giraffe!  He was apparently transported around the Town by a zebra when conducting his house calls.  At the outbreak of the first World War his menagerie disappeared and it is believed that the animals were either eaten or liberated and their descendants may be some of the strange animals reported to have been seen on Cannock Chase. 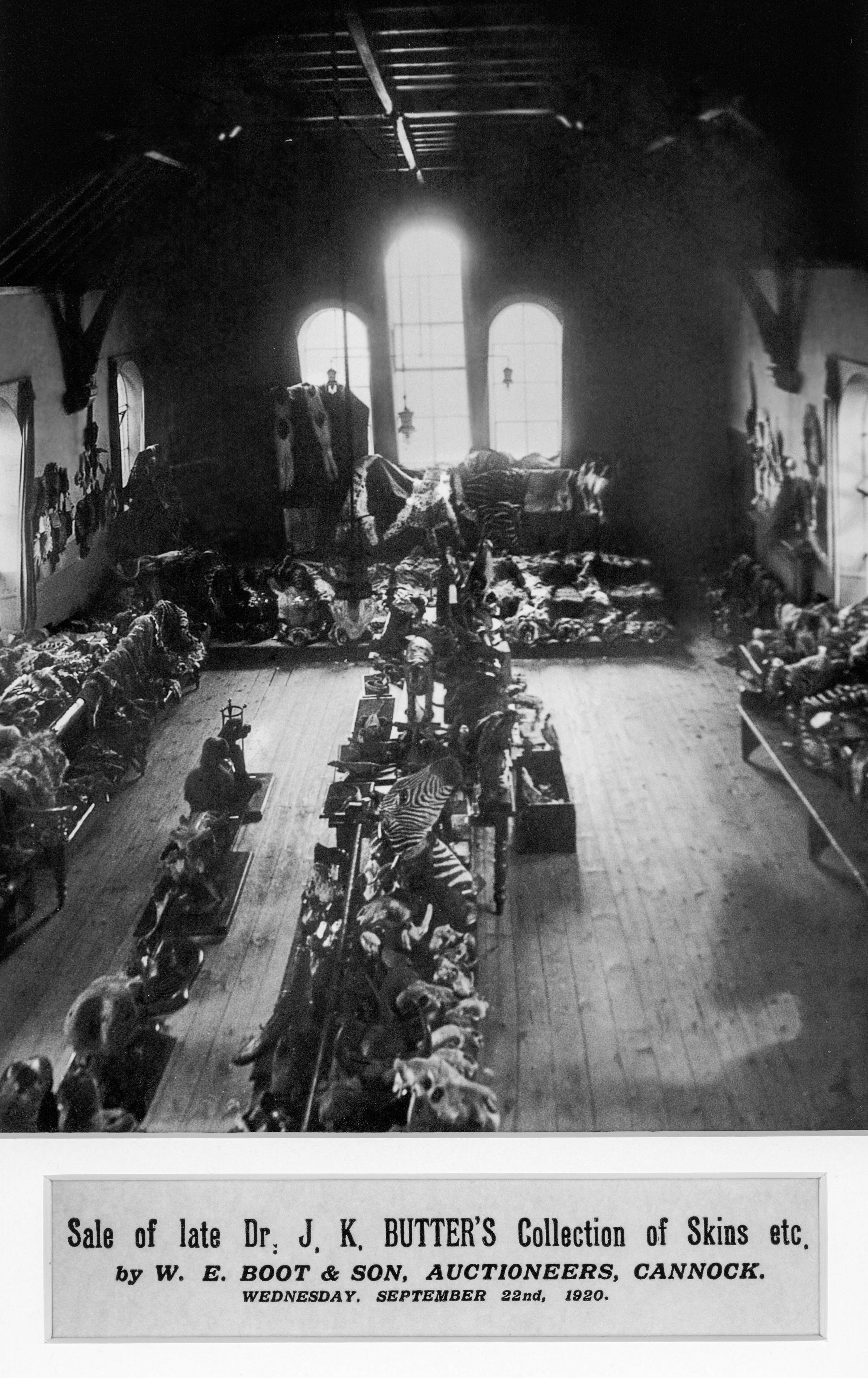 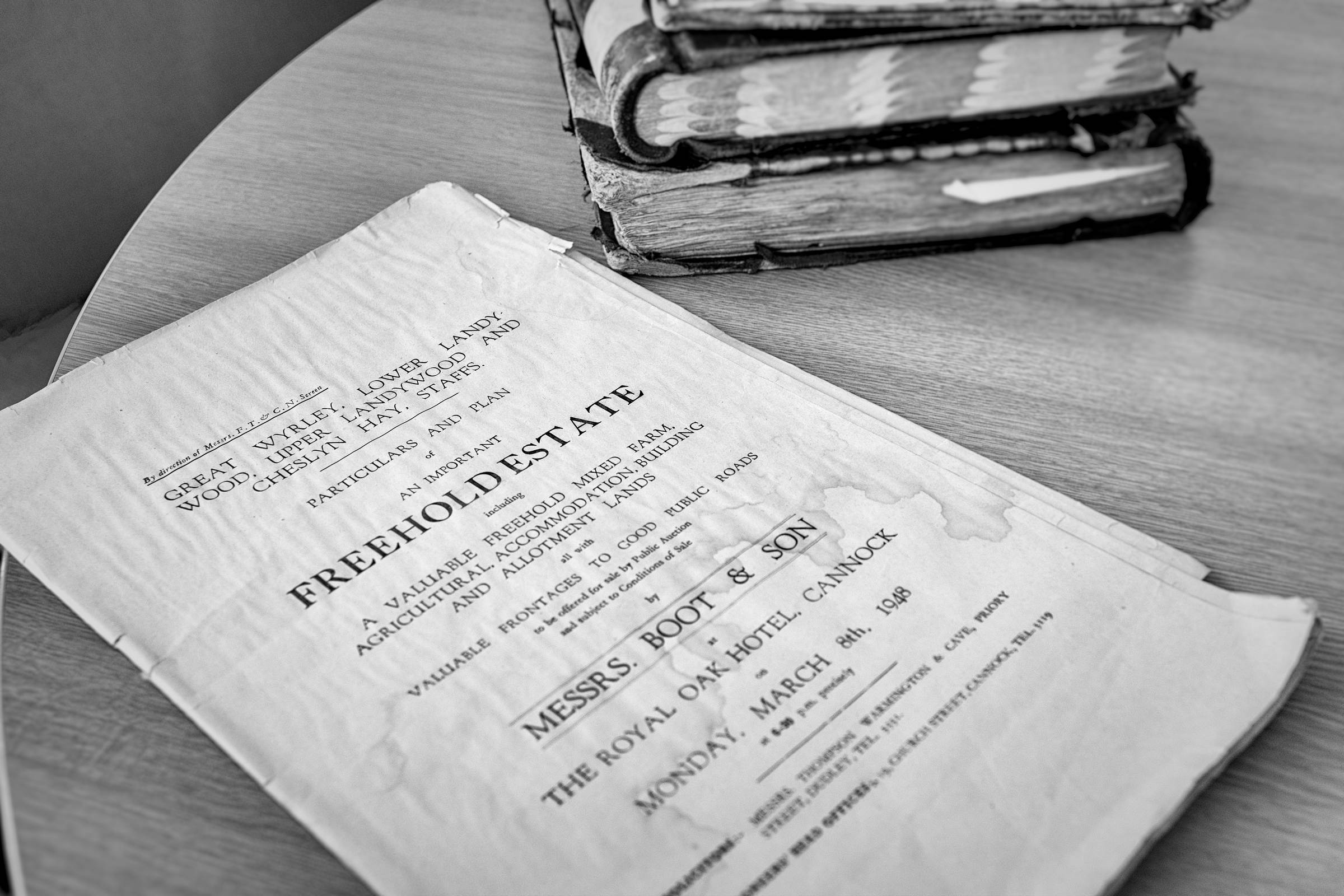 Regular Property Auction sales were conducted at The Royal Oak Inn in Cannock, Furniture Sales at The Newhall and Live Stock Sales at the Firms Auction yard at the back of the Roebuck Inn in Cannock.

The Firm had conduct of the sale of the Marquis of Anglesey’s land and estates in and around Cannock, Hednesford and Hazel Slade in the mid 1940’s. It was a two days sale held in Cannock. Regrettably we are unable to locate one of the old sale catalogues. 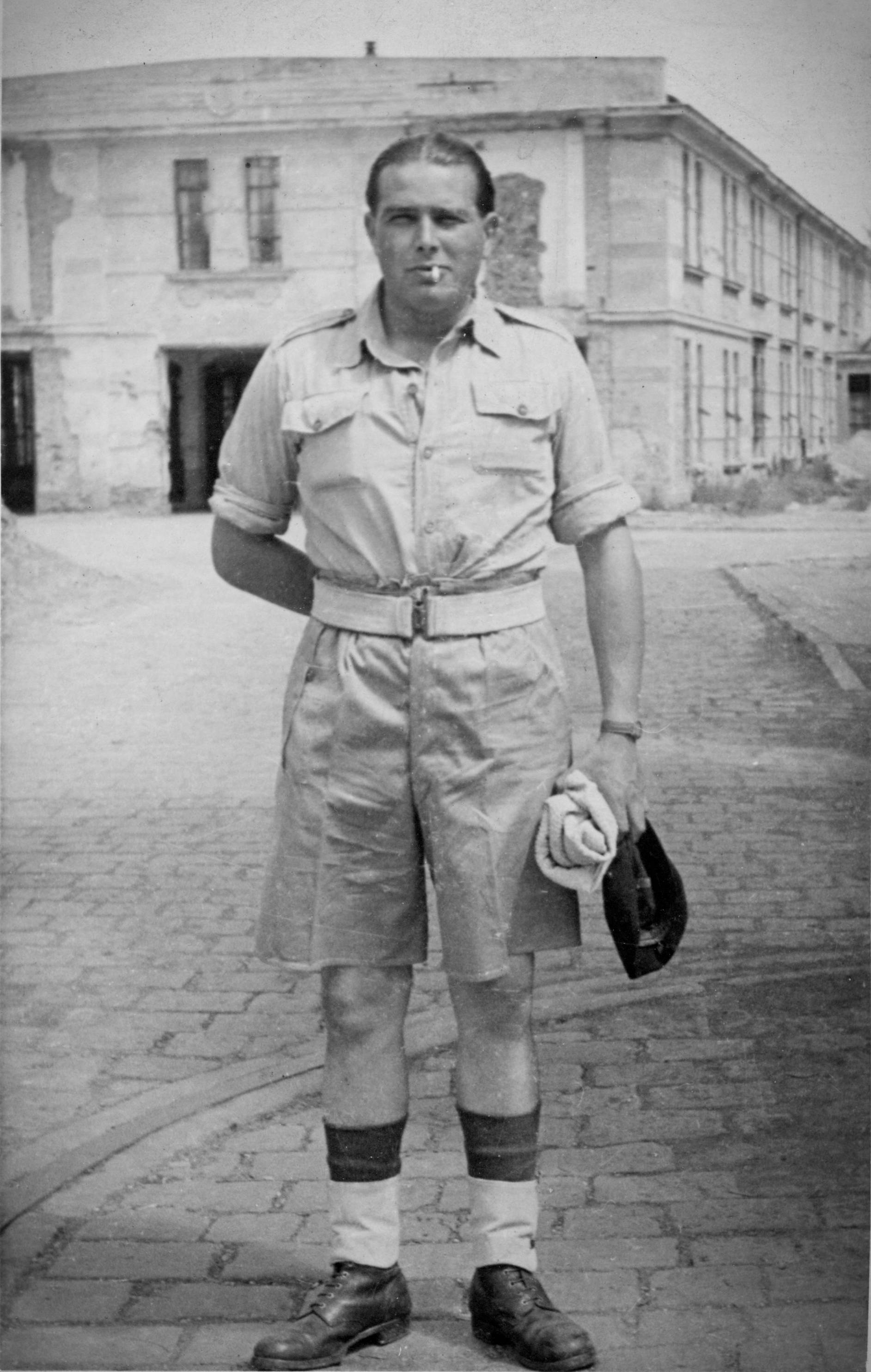 William Evelyn’s Son, Peter Anthony William (confusingly known as Tim) joined the Firm following the Second World War where he saw active service during which time he was wounded. His first Auction sale was conducted at 41 Ebenezer Street, Hednesford on the 11th September 1947. Regular almost weekly furniture sales and property Auctions were conducted at the Public Rooms Cannock and Property Auctions at The Royal Oak Hotel or The Anglesey Hotel in Hednesford. 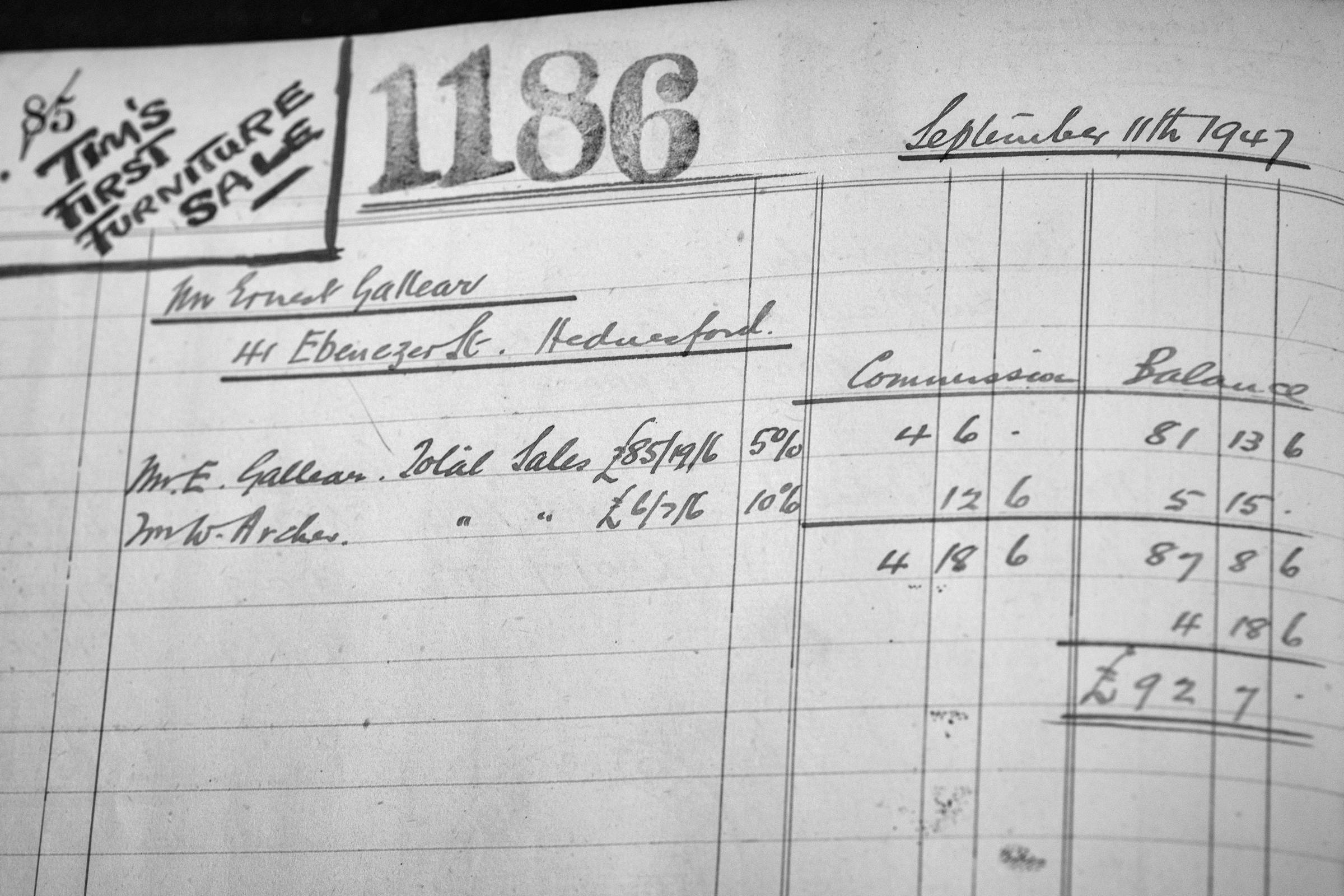 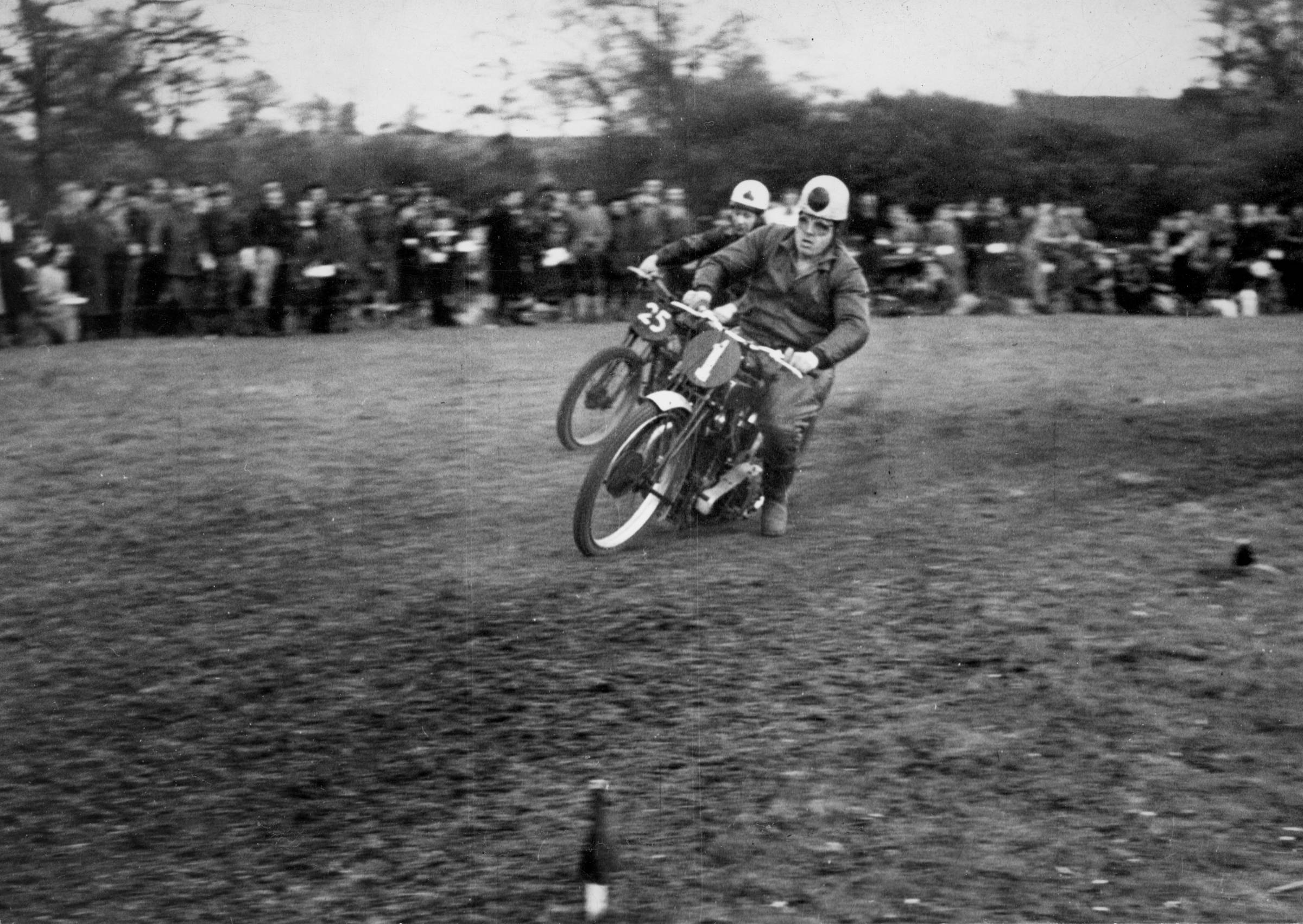 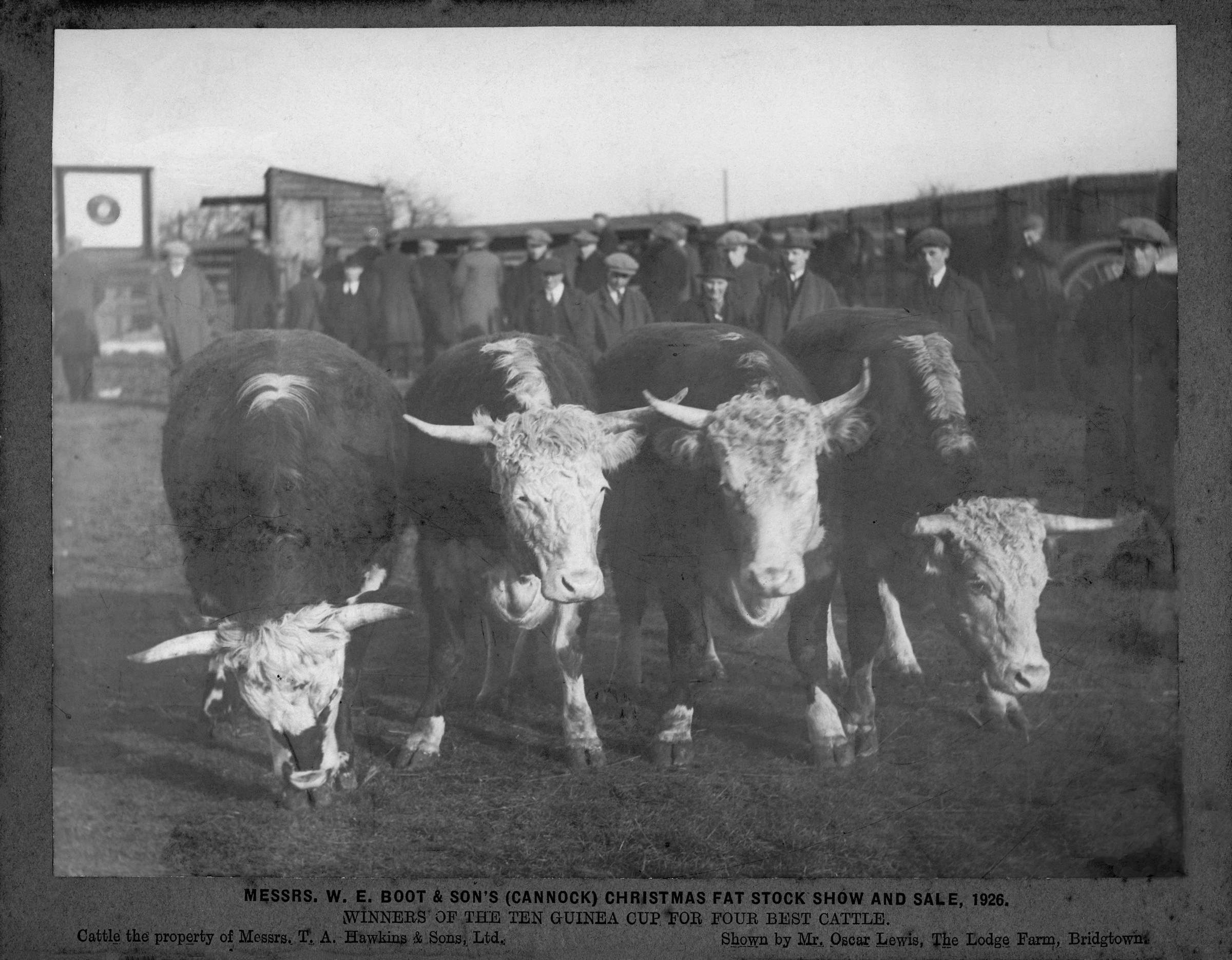 Timothy William, one of the current Directors joined the Firm in 1979 following graduation from Kingston Polytechnic with a Diploma in Estate Management and commenced his practical training as a Chartered Surveyor under the watchful eye and guidance of George Scotney, qualifying as a Chartered Surveyor in 1982. Tim’s first dispersal sale was conducted at the WM Engineering Works at Cannock Wood on a freezing cold day in December 1980. In 1997 Tim Senior retired and Robb Lyne joined as a Partner. Robb, an exceptionally experienced and energetic specialist in the sale of residential property and Classic Car enthusiast started his career with the well known and highly regarded Firm of Chartered Surveyors, Messrs. Evans & Evans. Robb and Tim continued to expand the business so much so that additional land was acquired from the Local Authority and a large extension provided to the offices in 2006. Tim and Robb have been involved in many large property transactions, one of the largest was providing valuation advice on the acquisition of a large residential portfolio in excess of £40 million in South Birmingham and also provided Expert Witness in the High Court in respect of a substantial group litigation case.

The latest edition as a Chartered Surveyor, Amy Bishop (known as Bob in the office) became a Partner in 2018. Amy joined the Firm as a Saturday morning girl way back in 1997 and has progressed over the years. Amy is a rounded property professional specialising in residential lettings and property management and is thought of as a highly capable Surveyor and Valuer.

Robb retired from work in 2019 and Boot and Son, a partnership then changed its legal status to a limited company. The directors now comprise Tim, Amy and Christine Lum. Christine, a northern lass and a Chartered Accountant has been with the practice for nearly 30 years and has expertly guided the firm through various economic climates and has a large involvement with property management. Christine is in charge of all things financial.

The involvement of Chris and Amy has bought a new dimension to the firm which like the profession as a whole has been historically male dominated. Their dynamism, professionalism and approach has been warmly welcomed by both private and corporate clients alike.

The Firm was founded on professional ethics and service to the local community and this has not altered since 1919. Perhaps the only difference is property prices, technology, base rates and inflation.

Very easy to deal with and got back to me very quickly. I would strongly recommend using them if you need to sell your home or you need a valuation. Keep up the good work.

Boot and Son have been looking after our rental properties for several years now. Tim, Amy and the team do a fantastic job for us. The service they provide is first class and I have no reservations whatsoever in recommending them to other private landlords.